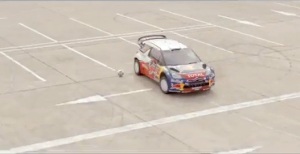 Citroen is the official sponsor of the “Equipe de France de Football” in other words, the French national team. For this commercial Citroen combined humor and fun featuring its French rally driver, Sebastien Loeb. Sebastien is the record holder of 8 world titles, 71 victories and 107 podiums in the WRC championships. He has been sponsored by Citroen since 1999. Sebastien currently drives the newest model of Citroen, the C4 which has of course been modified to fit the rally requirements. The ad is very fresh and funny. I really liked it.