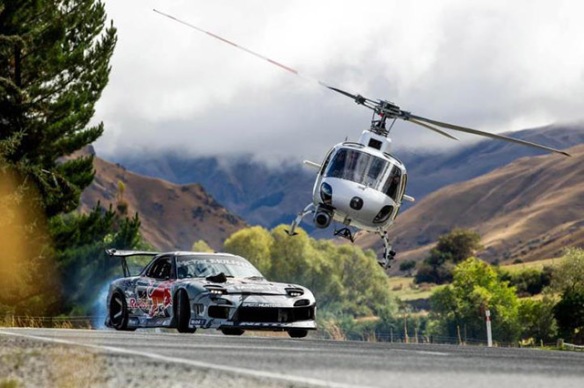 Mad Mike competes in two pro drift spec Mazda cars. All over the globe and every time he is behind the wheel and initiates his high speed drift he still experiences that same rush of adrenaline that keeps him hooked. He recently conquered the Crown Range, New Zealand a road composed of 47 corners, 1076 metres elevation, 10.4km long, one of the most demanding and technical drives of the country. For the first time the mystic road has been closed for only one man, Mike Whiddett. Mike was able to pull sixth gear along the Crown Terrace and winds the Mazda RX7′s 750 horsepower engine out to its redline hitting a max speed of 240km/h on those slippery and tricky mountain roads. A couple of slow motion cameras, some Go Pros, a helicopter and a big filming crew and BAM the greatest ride of all time has been written in history. (The Behind Scene video is linked below as well) Red Bull I salute you for sponsoring such amazing people!