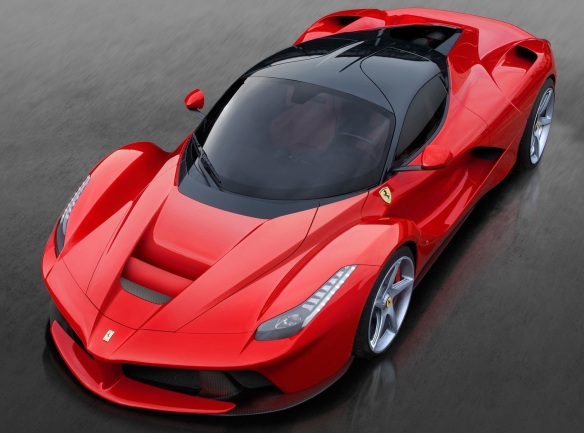 Arriving at the Geneva motor show, everyone expected the P1 to be the only star of the show they were surprised to find 2 other, the Lamborghini Veneno and the LaFerrari, the new breed of the Enzo. Since the Venom is gonna be owned by only 3 persons on the planet, two Americans and a guy from Saudi Arabia we can forget about it and focus more on the two main rivals, the P1 and the LaFerrari.

Developed in 499 examples and in collaboration with the F1 Scuderia Ferrari team and drivers, Fernando Alonso and Felipe Massa LaFerrari is the fastest Hybrid production car ever build. It is equipped with a 6.3 liters V12 engine that revs to a maximum of 9,250 rpm and delivers 800hp combined to it, a HY-KERS electric motor with 163hp. This adds up to a total output of 963hp and 900 Nm of torque coupled with the F1 dual-clutch gearbox to the benefit of optimal weight distribution. The electric motor works in collaboration with the V12 making sure torque levels are high at low revs. The batteries are charged under braking (even hard braking with the ABS active) and every time the V12 produces more torque than required, such as in cornering. In the latter instance, rather than the being sent to the wheels, the excess torque is converted to energy and stored in the batteries.

The design of the car was achieved by putting an Enzo into a wind tunnel and fine tuning it. The chassis is made with no less than four different types of carbon-fibre. The seats are melted into it. It is the steering wheel and the gas and braking paddles that can be adjusted to fit the drivers dimensions.The seating position is very similar to the one in an F1 racing car: very low, close to the ground making sure the center of gravity of the car is as low as possible. LaFerrari benefits from an active and instantaneous aerodynamic system. Five flaps (two in front one in the middle and two at the back) located under the car and big rear spoiler generate downforce when needed without compromising the car’s overall drag coefficient. 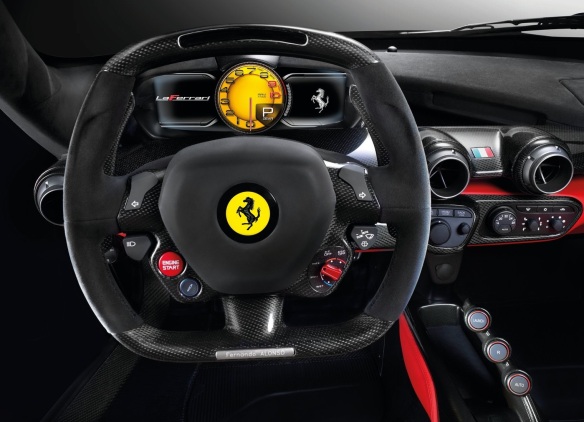 LaFerrari? What sort of name is that? What is the next one gonna be called LaFerrari II or something? Replacing the famous Enzo and after 11 years of research, I think that a more interesting name for it could have been found. The over-all look of the car is fine but I have some problems with a couple of details. The front bonnet is and the back are very inspired by the Enzo, which is good. However the front lights and the rear ones are stolen from a 458 Italia, the side mirrors look like a mixed of the Mclaren MP-4 and the Zonda ones and why is steering wheel in sort of a square shape? For a successor of the Enzo I think it should have been more refined, it is not “magical” enough. I feel like the Ferrari team was so focused on the performance and tech stuff that they missed out a bit on the design phase. In case you feel like watching an Enzo drift on dirt, you can always click here. (The P1 will be reviewed and compared in another post later on).