A typical apocalyptic commercial for the official launch of the Huracan. You might think that Lamborghini has dropped the tradition of naming its car models after reputed bulls but you would be wrong. According to Lamborghini, Huracán was a bull that fought in Alicante in 1879. With its triple meaning of storm, Mayan god, and raging bull, this might be the coolest car name ever. 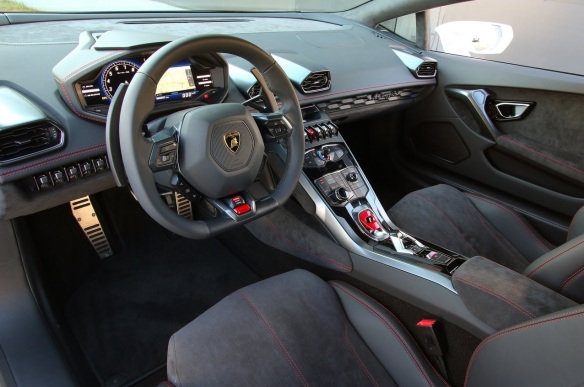 Considered the entry-level Lamborghini, what the California is to Ferrari, it is the replacement of the company’s best-selling model ever, the Gallardo. A worth successor? Powered by a 5.2-liter direct-injected V10 delivering 610 hp and 413 lb-ft of torque that bull would fly the 0-100 km/h in 3.2 seconds (0.2 faster than the 458). The chassis, the result of the combined work of Audi and Lambo weighs 10 per cent less than the Gallardo, but is 50 per cent stiffer thanks to the use of carbon fiber and aluminum. Transmitting the immense power to the new freshly engineered all wheel drive system is a 7 speed dual clutch gear box. A clever feature allows you to hold the left hand paddle as you’re braking hard, entering a corner, automatically the lowest gear possible will be selected in order to provide you with maximum acceleration out of it. All those elements can react differently to the click of a button, the ANIMA (translates as ‘soul’ in Italian) on the bottom of the steering wheel which is much like Ferrari’s Manettino dial.

Being a mix of Aventador and Gallardo, that beast look angry! And it sounds very angry too, judging by that apocalyptic launching ad which reminds me of the Aventador launching commercial released a couple of years ago. The world is coming to an end, the earth’s 5 elements are going crazy and your Lambo is your only key of survival! So, a worth successor? I would say definitely yes even though I think a couple of more ponies could have fitted under the hood. When Ferrari is extracting 570hp out of its V8, 610hp is a bit short for a V10. Yep I would still get a 458 over that massive bull. Oh oh and I forgot to mention, there is a Huracan coming to Lebanon in a couple of month and I met its owner 😉 So stay tuned to TheAdsGarage instagram account to have a first glimpse at it!