A few days ago Mercedes revealed its all brand new SLS AMG GT3 45th Anniversary edition model. I just love the “anniversary editions” sports cars they always have amazing features. Most of the times, the features added to the car transforms it into a collection car, not a “better to drive version” of the production model. This SLS AMG GT3 is a perfect example. Would you be able to drive this version of the SLS in your every days life? I dough it. For this 45th anniversary, the AMG team worked on a race edition of the SLS model. They mostly developed the aerodynamics. This edition is much lighter than the road version. It features a huge rear spoiler, a roll cage and other aerodynamic parts. 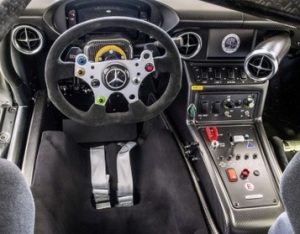 The interior is completely optimized to minimize weight. A big number of the luxury features have been replaced by carbon fiber race like buttons. Only 5 of these monsters will be build. They will be completely hand made and delivered by the AMG team directly to the lucky customers. Regarding the engine, the SLS GT3 will feature the normal 6.3 liters V8 that is available in the SLS AMG model. 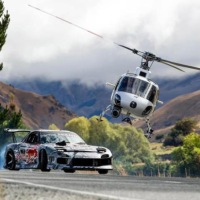